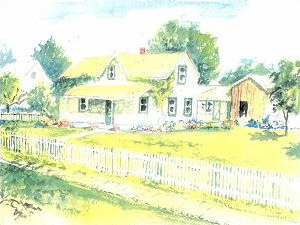 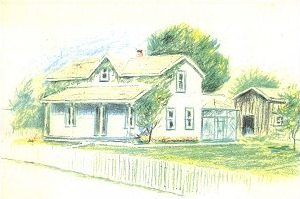 The house on South Williams Street. 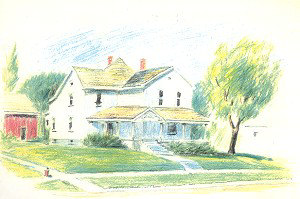 This house burned in 1904 but the shell was moved to South Cherry street, a block west and north of its original location, and rebuilt. It was originally built on two lots, the lot on the south being used for an orchard and large garden. A grape arbour led from near the back door past the wood shed to the back of the lot to a barn where chickens and a cow were kept. There was no basement, washing clothes and similar household chores being performed in a small room off the kitchen. Water came from a well near the big oak tree that can be seen looming over the rear of the house. The white picket fence separating the house from the street and the Neeley's to the north was removed in 1902 or 1903 when fences went out of style. A stone sidewalk to replace the former wooden one was installed by the city shortly before the fence was taken down and a little later the street was paved with brick.

Albert and Grace's first four children were born in this house and the youngest, Claris (Bill) was also, after the house was moved to Cherry street. John was born in "Dixie", across the tracks in the west part of town where the family first moved after the fire, and Florence was born in the Lowenthal house on North Cherry, catecornered from the Presbyterian church.

The house on South Williams Street, a block north of the house where the first four Courtright children were born, which the A.M. Courtright family occupied until Brooks finished High School. The oldest two boys were by that time studying in Ft. Wayne, Indiana and a the U. of Michigan. Evalyn was in college in Defiance. This was the first house the family lived in that had a basement. It was heated by a pipeless furnace in the winter. The furnace burned soft coal and had a single large register in one corner of the living room, warming air rising thru the middle and cold air flowing back along the edges, not a very efficient arrangement. This house was also the first the family lived in that had an inside bathroom. The barn at the rear had a stall for a horse and good sized space for a buggy or carriage. The upper part was a haymow.

The rebuilt original Courtright house from which the family moved into this one about 1911 or 12 is nearly directly back of this on Cherry Street.

When I was perhaps 9 or 10 years old I came across an old History of Fairfield County, Ohio, in my Aunt Irene's old bookcase, in which there was an account of an Indian attack on a settlement near what is now the city of Lancaster. Two white men, one of whom was named Albert Maywood beat off the raid by hiding on a rock hill called Lookout Mountain. One of my friends, Arthur Neeley, whose grandparents had also lived in Fairfield County, and I explored Lookout Mountain when we were 14 or 15 years old. My grandparents evidently knew the story of the attack and gave my dad the name Albert Maywood. When I was named for my father my parents started calling me Maywood instead of Albert altho it is impossible to tell whether Maywood is a boy's name or a girl's.

There are several reasons why I want to put down on paper some of the things I remember. In the first place it is just a question of keeping my memory active which I hope will help prevent me from becoming senile, tho that may be just a question of my blood supply. Secondly, I would like my four grandchildren to know how life was lived by their ancestors before they were born. In the third place I started keeping a diary after we retired (Yvette retired at the same time I did) and this will fill out the parts before that. It will also complete the history of the Courtright family which began in Courtrai, Belgium, about 1500. Finally, it is an activity I can pick at any time I lack something to do.

My father came to Paulding to take a job as telegrapher and freight clerk at the Cincinnati Northern RR depot, the same position he had held at the depot in Bryan, the next county north. The Cincinnati Northern ran along the western edge of Ohio from Cincinnati and terminated in Jackson, Michigan. He had studied bookkeeping end accounting besides telegraphy and after two or three years he left the railroad and took a job as an accountant and bookkeeper. When I was about ten years old he gave me his two telegraph instruments. I practiced quite a bit with them on the living room floor and got so I could send pretty well in Morse code but couldn't receive much. Receiving and sending are two different operations, like speaking and understanding a foreign language.

My mother's father, Thomas Bashore had moved to Paulding from the area around Wapukoneta, Ohio, a little south of Lima, after he had married my grandmother, who was a Craig. The two families must have come in a body as my mother had several aunts and uncles by the name of Bashore and Craig in and around Paulding. Both my grandfather and my great Uncle John Craig had been soldiers in the civil war, as had my mother's Uncle Will Straw who had married my grandmother's sister Martha. All names ending in "a" were pronounced as tho they ended in "y" so we called her Aunt Marthy. Florida was Floridy, Canada was Canady etc. After I learned to read I tried to correct my pronunciation but it wasn't easy. When we went to visit Uncle John and Aunt Matt I would sit and admire the saber hanging on the wall with the civil war uniform.

Uncle Will's chief pastime was hunting and fishing and, being comparatively well-to-do, he would often go west to hunt buffalo, one of the crowd of hunters that nearly exterminated the buffalo herds on the prairies. Nearly everyone owned a buffalo robe in those days. They were popular as lap robes, especially on winter sleigh rides. Aunt Marthy had several buffalo robes and there was a mounted buffalo head on one wall and a mountain lion's skin with the head mounted on the floor before the sofa. It made me quite uneasy when I was very small. I remember also a big iron frog which was used to prop the door open.

My grandfather Bashore had been a schoolteacher and surveyor for Paulding County. He was an expert at Spencerian handwriting in which the line is made thin or thick at the will of the writer. I kept some of the fancy birds he drew using the technique and other examples of his writing style for a long time but they have disappeared. His soldier's pension from the Civil War ruined him finally as he began drinking and became an alcoholic. My grandmother had to put him out and he went to live in any old shack he could find. That was before I was born and I never knew I had a grandfather until my cousin Russel Moran, Aunt Mable's son, discovered that the old man living in a back room of one of the downtown stores was our grandfather. Russel, Raymond and I made an attempt to exploit the discovery by begging pennies for candy but my mother got wind of what we were doing and put a stop to it. After that I don't ever remember hearing my grandfather mentioned until he was killed by a train at Sherwood, Ohio, where he had gone to drink. Paulding County had voted dry in the last election. He was brought to our house for the funeral ceremonies. He wasn't a pretty sight.

Thomas Bashore had four children, three girls and a boy. My Aunt Mable was the oldest, then came my mother, Grace Dell followed by Scott. My Aunt Ruth was the youngest. I remember her first as a pretty teenager. She is 94 now (1980) and has just moved to a rest home in Lakeland, Florida. Her mind is fuzzy but she is in good heath otherwise.

I greatly admired my Uncle Scott. He was a real howe type. He never went beyond high school as he had to go to work early to help support my grandmother. He was often gone for considerable periods working at jobs in Ottawa, Iowa and in the steel mills in Chicago. He subscribed to Colliers and the Saturday Evening Post and I spent a lot of time at my grandmother's reading them. He always treated me as tho I were an adult. His closest friend in Paulding was "Doc" Ares who was a reporter for the Paulding Republican.

Uncle Scott enjoyed hunting and fishing and one day in the fall when I was about 9 or 10 he asked me if I would like to round up the boys in the neighborhood to go hunting for rabbits in Straw's Bottom. It didn't take me long to spread the news. He said we would have to have a dog to scare the rabbits out of the brush piles so we took along a yellow haired mongrel belonging to one of the boys. It wasn't trained to hunt rabbits. Uncle Scott had admonished us to stay back of the gun but the first rabbit we scared up started like a streak with the dog after it and all of us boys running after the dog. When I remembered we were to stay back of the gun it was too late. We were all disappointed when Uncle Scott told us that was the end of the hunt. He couldn't take a chance of shooting the dog, not to speak of one of us.

I was about the same age as I was when we went to hunt rabbits when my dad and uncle Scott took several boys to Cecil for walnuts and hickory nuts. Most of the leaves had fallen to the ground by that time and I was walking along the bottom of a ravine thru the leaves looking up at the trees to see if there were many nuts left. When we saw nuts we would throw a stick against the branches to knock them off. Suddenly I heard the leaves rattling just at my feet and looked down to see that I was just about to step on a long blue racer. The rattling made me think of rattle snakes and the next thing I knew I was at the top of the ravine. I don't know how I got up there. I called the others and Uncle Scott picked up a stick and threw it, breaking the snake's neck. No snake ever had a chance in those days, poisonous or not. It was really a beautiful creature, over 6 feet long, a deep blue on top and light orange underneath. It thrashed around in the dead leaves for some time before it died.